A job for the weekend

My aim this weekend was to install all the electromagnets that will be used to uncouple wagons fitted with Sprat and Winkle couplings. It all started well marking the position of each electromagnet by drilling through the boards from above with a 1.5 mm drill. The hope is that the small holes, one of which that can just be seen in the picture below, will be easily filled so they're not too obvious and might be used as a position marker. 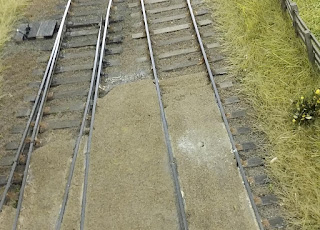 The thickness of the baseboard was then calculated and 5.5mm holes drilled from underneath to a depth just short of breaking through above ground. The only worry I had was, when the electromagnet was installed the ends of the poles would be approximately 5mm short from the bottom of the sleepers and might not be close enough to the rail hight to uncouple the wagons. As a test one electromagnet was installed on baseboard one and wiring attached through to the control panel.

Luckily when the circuit was activated I was able to uncouple the two test wagons on which I'd previously installed Sprat and Winkle couplings. Following this successful test four more electromagnets where duly installed in baseboard two. 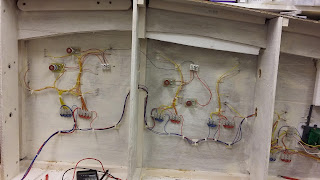 Unfortunately at this point in the proceedings I ran out of wire... such progress only to be halted by the schoolboy error of lack of supplies. An order has been placed for more wire which will hopefully arrive in the next couple of days.
Posted by Yan at 23:15