Well... less than 12 weeks before the layout’s next outing and I've decided to dismantle the two end boards. This task has been on the "to do" list since returning from Scaleforum 2018 when it came back with a few trees damaged due to problems fitting the layout in my car. For the short trip to the subsequent Immingham show I was able to borrow a neighbour’s trailer. Not wishing to push my luck with the neighbour, I've decided it's about time I adapted the layout to be able to transport all of Tredethy Wharf safely in the car.
My plan is to complete two layout transportation objectives before the Caistor Show in October.
Stage one of the reconstruction is to take off the scenic break ends of the end/fiddle boards. These will be reused and adapted so they can be bolted on to the boards and still act as supports for the lighting pellet. 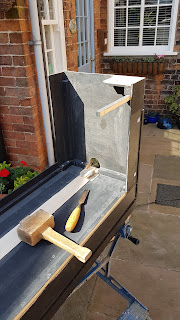 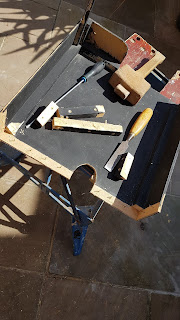 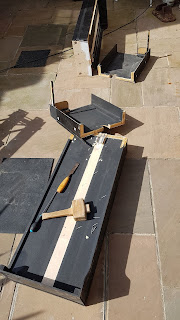