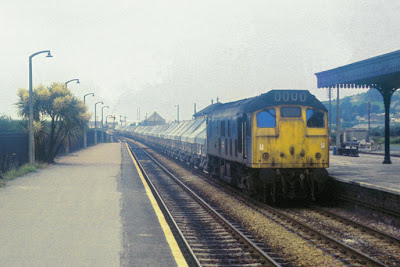 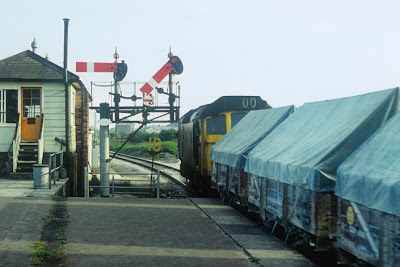 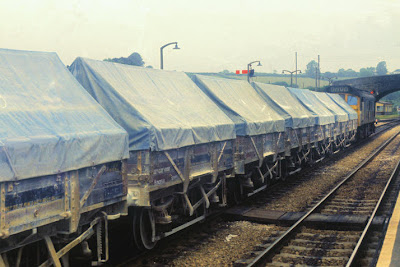 Clay wagons were not all white!! Nice
It looks like the top of the axle boxes have been weathered with clay dust but the bottoms are black, unless that is a shadow effect. I will have to learn some subtle weathering techniques to achieve anything like the above finish on my proposed fleet of wagons.
More photos of Class 25's can be found on this excellent reference site here.
Onwards and upwards and back to the decorating tomorrow.
Posted by Ian at 00:08

The final picture highlights a challenge that I am currently musing over - what will be the "unifying colour" for the layout and all rolling stock.

The tint that suggests the locality, the atmosphere, the season. It's taking quite a lot of thought, as before I start (re-)painting in anger, I want to know how I will achieve consistency. More to follow...

I agree, the weathering on that 25 photo is wonderful...looks like rain streaking off the diesel clag from the roof, mixed in with clay dust. I like the oil staining on the track, too.

It's difficult to get a fix on colour from a photo because often there is the blueing effect of old Kodak transparency film...I've got some that have gone a pink shade.

There seems to be a fashion just lately in the modelling press of taking pastel shaded photos of models, which makes me feel slightly queasy...better to go outside and look at the real thing, from a suitable distance, of course. I agree, Flymo, consistency is hard to achieve. Look forward to seeing your progress!