eBay sales have been going well, which has enabled me to fill in gaps of coaching stock requirements for my ambitious Grogley Junction. Oh, golf clubs have also been purchased.

On the modelling front I've made a start on converting a couple of Class 08 shunters for Tredethy Wharf. These two will eventually be St Blazey engines but a little more research is involved as I'm realising that the differences between 08s is a potential minefield. Also on my workbench are four 7 plank wagons. 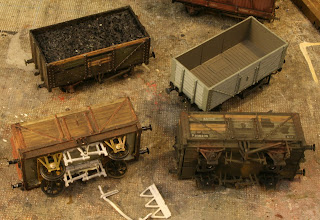 Three of the above are Bachmann models which are receiving either a complete repaint and/or weathering. A fourth is a very old wagon of uncertain parentage which I've had for some time in a part-built state. My plan for the next few months is to try and clear as many part completed wagon projects as possible before starting on new builds or conversions. These part-built projects include a Cambrian LMS steel box van; a repainted Bachmann steel open wagon with wooden doors and a SR Plywood 12T van which I've also repainted; aalong with a couple of part-built Cambrian Models 16T mineral wagons. I'll then make a start on a few Brake Vans and people for the Brake Van Special. Once these are completed I hope to have cleared more "stuff" via eBay and created a reasonable hobby fund for making a start on Grogley Junction.

The title of this post of "Web site update" is due to time also being spent updating my Tredethy Wharf Web pages. The updates have now been applied and the new pages are now live. If anyone is interested the site can be found at: http://tredethywharf.co.uk/