Stuttering progress and the next project

Well, the last two weeks have not gone to plan... How often do we all say that? With two weekends away visiting friends and family along with a number of week nights spent away with work, progress almost ground to a stand still on Tredethy Wharf. What I have been able to achieve is not really much to shout about so will have to wait for the next blog...

But.., while spending evenings in hotels, not drink in the bar but playing "Billy no mates" in the hotel bedrooms, I've been giving some thought about what comes after Tredethy. Over the years, before I joined Scalefour Society, I'd collected almost all of Ratio's GWR buildings with the intention of building a GWR branch line terminus. I've also been slightly sidetracked by thoughts of a Taff Vale colliery and collected a few buildings and stock to suit.

Since starting this blog I've realised that there is a big difference in timescale to what can be achieved in OO compared to P4. This realisation has come from the time it has taken me to get Tredethy Wharf built. So I'd started to think, is there some merit in a small project being a viable option to follow on from Tredethy? A small layout would enable me to exhibit if it was considered good enough. It would also be an achievable project especially if I go really small and extended Tredethy to include a Clay Dries or Stone sidings....

So while being 'Billy no mates" I revisited some of the track plans I've collected over the years, then with pen and paper in hand I sketched out some ideas. While doodling a troublesome thought kept creeping into these ideas. Once Tredethy is scenically built, to complete the project, I will still need to build a few locos (a Beattie Well Tank, a WR 1366, BR Class 03 being three locos) as well as a few more wagons. These are not going to be built overnight and at the pace I'm progressing may take two or three more years before I can exhibit Tredethy with a correct loco fleet spanning a few years. If I change tack to a GWR BLT or Taff Vale Colliery these layouts would required a different loco stud and other rolling stock to be built. Hmmm.... so a change of tack might not necessarily be a quick project.

So what of the first and last big project, Grogley Junction?

So during my second week away I dug out the current track plan for Grogley and started to have a think and a bit of a tweak... The below is what I've ended up with.

The major changes I've made, since the last track plan I've posted, are adding a three platform station reducing the line towards Wadebridge junction to single track and adding Polbrock Engine shed. The more minor additions are a small loading dock siding and a siding that will be used for coaching stock storage. This is version 15 of ideas for this project and does look like it has grown "arms and legs". My thoughts have been, if this is going to be the (first &) last big project then it had better include all that I would like to see on a layout and give good operational opportunities. So a layout with a station, exchange goods sidings, a junction, and an engine shed, what more could I want...? Hmmm, don't answer that 'cos I could think of a few if I tried :-)

Below is just the track plan showing the kick back for the Bodmin cassette storage so it can be accessed from both directions. This would allow Bodmin to Wadebridge trains to be stored on these cassettes.

One advantage of this latest track plan is, by replacing the previous hidden sidings with Polbrock Engine Shed, it has allowed me to increase the scenic area of the layout. This extra space has given the opportunity to represent a length of single track running along side the river leading into Polbrock. This will give me a better chance to replicate the picture below. 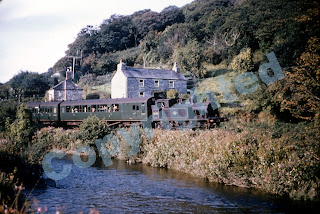 Another possible advantage is as there are two signal boxes (Grogley Junction & Polbrock) I could split the layout to allow for two or more operators. Wow, it is getting out of hand...

While away I've also been able to get the basic elements of the above into Templot. Some slight alterations have had to be made but overall it is the same as the above. To complete the track plan in Templot, I have to finish the turntable; a double slip; a three way turnout; and those tricky diamonds at the junction to draw. Apart from that the drawing is complete.

Well, will this project get off the ground or is it just a dream? We'll have to wait and see...
Posted by Ian at 23:01