So far this month I have been very disappointed with myself. Was hoping to have made progress with baseboards for Boscarne Junction, built my first P4 point, and built at least one wagon. Not only have I been unable to complete the above but I've also missed a Scalefour Area Group meeting.
Looking on the bright side there are another 14 days to the end of the month and I have made progress on a timetable for Grogley Junction and Boscarne Junction. The creation of this timetable has been going in the background for many months during short amounts of spare time and/or when I've been away from home. The main aim of this project is to build Grogley Junction, the emphasis is to create a timetable to make Grogley Junction an interesting layout to operate. But if I can build Boscarne Junction successfully there is the potential that I could operate both layouts together. So the idea behind putting the timetable together before I start building either layout is, I hope, to confirm the track plans and confirm that they will work together.
The timetable below does show that my original Grogley Junction track plan will probably need altering. This junction has developed into an important goods exchange between Wadebridge, Wenford Bridge, Bobmin General, Bodmin North, St. Blazey and Mawgan Porth. There are a number of goods movements which may prove that the two original exchange sidings are not enough. It also raises a question that I might be able to justify creating a duty for a shunting engine at Grogley Junction to shunt the exchange sidings. It is becoming a small marshaling yard.....
Below is the complete timetable so far, 9 pages in total, outlining 59 movements though Grogley Junction and 38 though Boscarne Junction. I am/will also be adding to this document all stock, loco rosters and duty numbers required for each train movement but this is it for now. 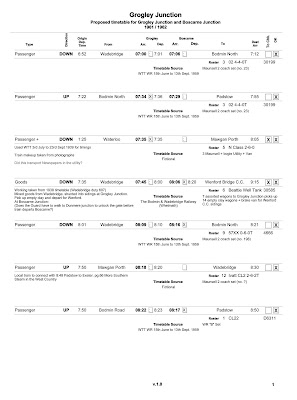 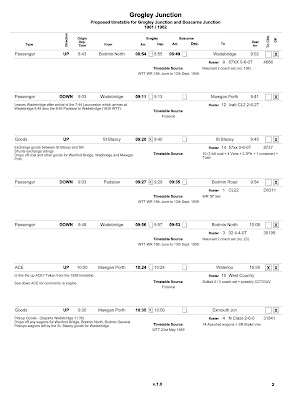 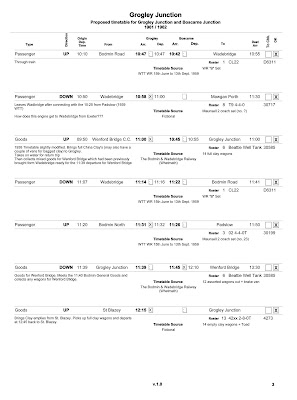 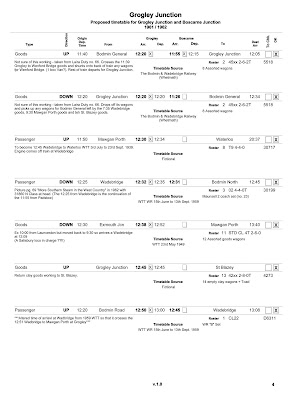 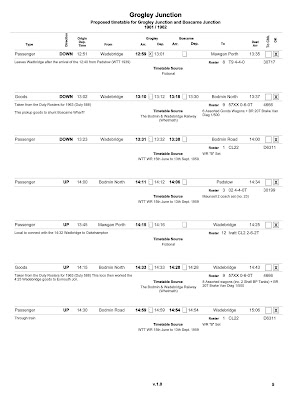 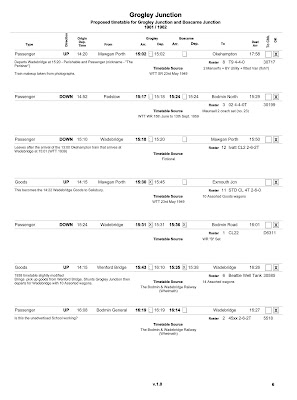 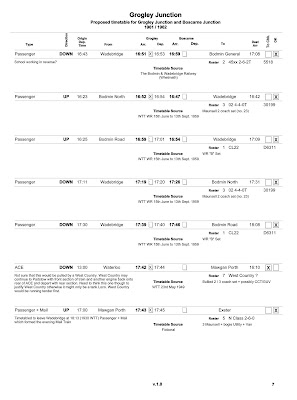 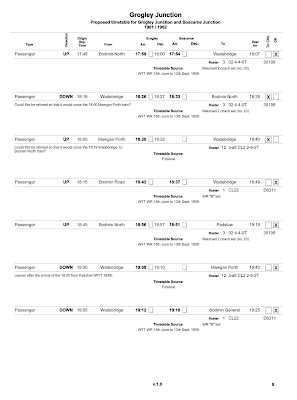 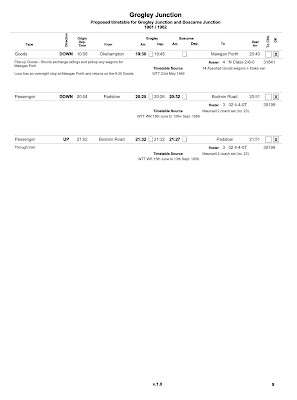 The timetable is still a work in progress but it looks like the track plan for Boscarne Junction will be OK. Any comments would be welcome.
Posted by Yan at 15:03 No comments:

I have only just found time to read the latest Scalefour News and found the article by Bryan Johnson on his Thurstaston project very interesting. He has already spent many years collecting and building locos and stock while continuing with researching the site. Something that I wish I had been able to do. What I did find really interesting was his thoughts on fiddle yards. Like myself he is proposing the cassette style fiddle yard and like myself he has freight trains that travel in one direction though the layout that need to be returned to their starting point behind the scenes.
My decision for a cassette style fiddle yard was made for two main reasons:
1) saving space,
2) the need to swap full/empty clay stock between fiddle yards behind the scenes.
Though I am worried about walking stock between the fiddle yards I could not think of another way to move the stock from one end of the layout to the other. But Bryan is suggesting installing a hidden track behind the back screen. What a thought.... Could still use cassettes but then slide the cassette across the board to align with the track that runs behind the layout. This would help avoid the catastrophe of a dropped cassette, containing eight or more precious hard to replace Ian Kirk clay wagons, while moving them between fiddle yards. Need to look at how this can be incorporated into my baseboards but I do like it.
Nice one.
Posted by Yan at 21:08 No comments:

Whether I build this quarter scale model or not, I need some idea, as a starting point, of the external contours of the layout. So I've spent a couple of hours this evening looking into the scenic contours around Boscarne Junction. I have eventually decided that the height of the trackbed above river will be in the region of 26 feet (104 mm on the layout). This is not as high as I was expecting but the decision has been made after many measurements on Google Earth and also looking at all the photos I can find. I've marked other heights on the track plan below (trackbed being zero). These are all best guesstimates with an eye on trying to create a good impression of the real location.

The trackbed to Bodmin North looks as if it rises slightly. At the moment I am unsure of the gradient but thinking it might be around a 1:120/150. Thing is, I doubt that this would be that obvious on the layout. So may not recreate this gradient. I do like the idea that the Wharf siding should be slightly lower than the branch so have added a 1 foot drop (4 mm) from siding turnout to just past the gate. This will be approximately 1:100 gradient and should leave about 2 feet of level siding to play with.

Though I knew of the footpath that crossed the line I was unsure of its exact position and had purposely missed it off the plans. While looking though some photos on the web I discovered a photo of this path crossing the river over a bridge adjacent to the rail bridge on the Bodmin North line. This looks an interesting feature so I've started to draw this in on the plan but cannot decide how to squeeze it into the rest of the layout. A little more investigation is required over the next few evenings before I finish adding this footpath.

The other scenic item that I'm questioning is the Mill Race. I am beginning to think that in my alternative history in the early 1960s, as possibly in reality, it would have been disused. So an overgrown, if not completely hidden by undergrowth, Mill Race will be probably modelled.
I am beginning to get a good feel for the layout now. Starting to see a 3D image and I'm surprised at how low the contours are. Still have ideas about changing the track plan slightly to increase operational potential but not convinced myself yet. Have only got a couple of weeks left to decide, as once baseboards are being built the track plan will be set. I will have to revisit my proposed timetable to see if my thoughts can be justified.
Posted by Yan at 21:35 1 comment: