Trial and (plenty of) error

Back to the track this evening and a little more trial and error with the V on the B8 point. I now hope I've produced something that will work OK. The rail seems firmly fixed, there's electrical continuity between V and wing rails and, to my amazement, a wagon will roll effortlessly through it. For the amount of time and effort I've put into building this V this is all very satisfying. 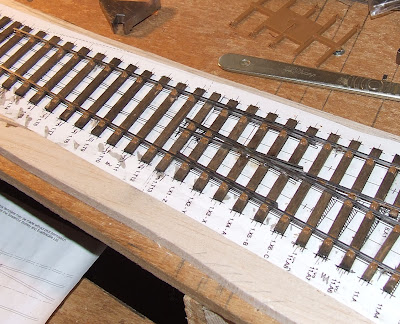 The technique I've used is to glue to the sleepers some of Bill Bedford's brass Point Slide & Special Chair etches to which I've soldered the V and wing rails. This has been the trial and plenty of error bit. Very little of the brass etches are visible either side of the rail which has tested my soldering skills to the full. I'm getting good at burning sleepers! ....... Hope the joints hold up when in use as I've only soldered one wire dropper from the V and will be relying on the brass etches to transfer the current to the wing rails. Next time I scratch build a point I might consider soldering some wire droppers on to the wing rails. The chairs around the V still need to be installed but this will be done later when I'm fully satisfied with the whole point.

The photo below is of my trail run for constructing the switch blades and might help to explain the above technique. 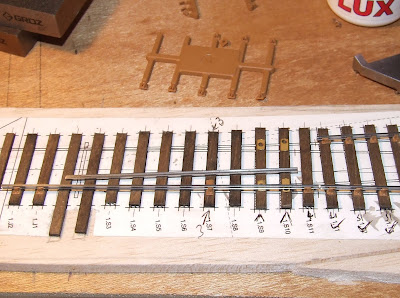 Any alternative suggestions to the above will be gratefully received........
Posted by Yan at 23:03 No comments:

Well I've done it.........entered my first Model Railway competition! I've no illusion that I've any chance of being placed but hope it will spur me on to build a few wagons and develop my skills.

So what to build?

Ideally for Tredethy Wharf I would build six Clay wagons….. Hmmmm…..I've set the bars fairly high in the respect that I would like to try to install sprung buffers on all goods stock. As yet I've not found a supplier of sprung self-contained buffers for clay wagons and not sure that I'm ready to tackle converting those supplied with the kits. For Tredethy Wharf I'll need 20 or more wagons and more for future projects.……. I don't want to fail to meet one of my objectives at the first hurdle.

So six general merchandise wagons it is…… the next question is, six of the same type or six different ones?

The decision I've made is that I'm going to tackle six of the same type. My thinking is that it will be quicker to batch build, then, if I have the time, I'll gradually build two or three of another type and so on and so forth. Finally, if I've managed to build more than the initial six, I'll be able to select the better ones for my competition entry.

I've always had a liking for 16T mineral wagons. Not sure if this was from seeing endless trains of mineral wagons rattling though Reepham station when I was knee high to a grasshopper. I've collected a few kits for these wagons over the years. Wenfordbridge branch saw its fair share of these wagons for local coal and coal for the Wenford driers. They will offer me excellent challenges in weathering. and not be too difficult to compensate. Sprung buffers, etching/castings for brake gear and different castings for axle boxes are all readily available. I have relevant books by John Hayes, Geoff Kent and Martyn Welch and a few reference photos in other books. It makes sense, to me, that these will be the first six.

So, out came the kits, from the Parkside range, 4 x Dia 1/108 PC21s; 1 x slope sided PC27; 1 x riveted PC54; 1 x French PC22; 1 x Cambrian LNER; 2 x Airfix kits; plus a few part-built Airfix kits from my EM gauge days; and a part built Parkside French type. Out came all the compensation units and different castings I've collected during this last year. Might need a few more bits as I go along, especially sprung buffers. There are plenty unbuilt kits for me to go at, so the part-built kits while be put to one side for the moment. I've collated a few components together and hope to make a start over the weekend...... Well.....hope so.
Posted by Yan at 23:27 2 comments:

This is what I've been thinking during the last couple of weeks about whether I enter the Scalefour Society's Armchair Modellers Challenge. The challenge is to build, depending on type, 4 to 6 wagons. Closing date is the weekend of the annual Scaleforum Exhibition in September. As I will need to build a few wagons during this year, one wagon a months does not sound much. In reality though, while trying to keep the build going on the layout, finish the 57xx, and wanting to start the High Level 03 chassis kit, time might be tight........This along with the fact that I will have to stay later on the Sunday than I would normally have planned, was making me think I'd give it a miss and build wagons at my own pace.....
But..... news in the last few days has made me rethink.... I may be required to help one of the exhibitors! If this turns out to be the case I will have to be at the show for the whole weekend. Bearing in mind that, apart from the RCH 7 Plank wagon, these will be the first wagons I've attempted to build for a number of years. I don't think for one minute that any entry of mine will have a chance of winning. The challenge will be another incentive to get on and build something, which I think is its main aim. Deadline for entries is the end of February. This should be enough time for me to think about which kits I could complete during, what no doubt will be, my normal erratic modelling stints over the next few months.
Posted by Yan at 08:00 4 comments:

Just to while away a few moments, before going to a family event for the day, I've built my first crossing V from scratch for the final point on the layout. The previous two crossing Vs have been from the excellent P4 Track Company's kits. As this layout is just a test track I thought I'd have a go at scratch building the final point. For a first attempt, at creating a crossing V for some considerable time, I'm quite pleased with it. 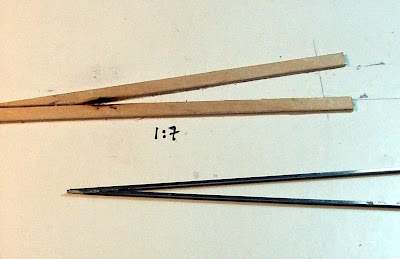 While I was re-watching the Wenfordbridge DVD, looking for more information on the Dunmere buffer stop, I saw a running number of a LNER 'Toad E' brake van. The footage looks to be from the late 1950s of a regular goods train, being hauled by 30585 a Beattie Well Tank, running to Wenfordbridge. Apparently an LNER brake van was regularly used on the Wenfordbridge goods turns. For anyone who is interested the running number is E153583, the body has narrow vertical planking with a pressed steel ducket and it is sporting the grey livery. The Bachmann model (33-803 - 20 ton brake van BR grey unfitted) looks to be a good starting point for a model of this brake van......
Posted by Yan at 13:17 5 comments:

Some further thoughts about a buffer stop for Tredethy Wharf......... I have a Mikes Models kit for a LSWR buffer stop and was intending to put it to use on the layout. Photographs I have of Wenfordbridge, and the photograph below of Dunmere Wharf, seemed to indicate they were all of the standard LSWR design on this branch. 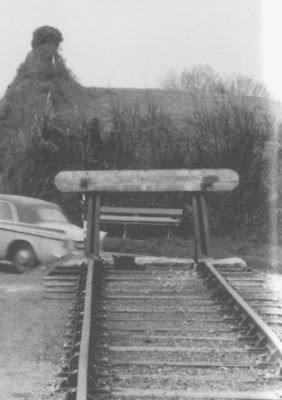 That was until, one day in September, while browsing through my collection of photographs, I saw in the corner of one particular photograph of Dunmere Crossing a three quarter side view of the buffer stop on the Wharf siding. Below is the relevant corner of this photograph. 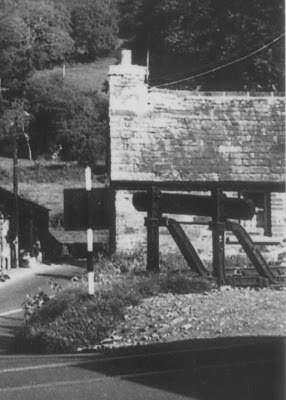 Back in September, Clive kindly offered to to make a new rail bending jig to help create this buffer stop. His current jigs don't quite bend the rail correctly for style of buffer stop. Before he does this, he has asked for a scale drawing of the buffer stop. I thought it was about time I created this drawing so yesterday I started, but it's not going well.

My problem is with the uprights.... Looking at the first photograph, it looks like there is one upright and, I would guess, it would be a single section of rail. When I enlarge the second photograph it looks like the upright is made up of two vertical sections of steel, possibly rail, bolted together. The angled sections of rail coming from the running rail to the vertical uprights look as if they have been bent through 180 degrees around the verticals as one continuous piece of rail. If the vertical section is made up of two sections of rail I should see a joggle in the rail as it bends around the verticals. It's not obvious in the first nor the second photograph.....

So where do I go from here? Sorry Clive but I'm thinking of reverting back to my original idea of using a standard LSWR buffer stop on Tredethy Wharf. I'll keep the Dunmere buffer stop on ice until I can confirm its correct structure. At some point in the future I'll probably need a buffer stop that does not take up much space. I'm thinking of two such plans where a Dunmere style of buffer stop could be used, my fictitious Polbrook Engine Shed and, more probably, on the fictitious Wharf siding at Boscarne Junction. Hopefully by the time I start to consider building another layout, I will have confirmed its structure. With all the photographs taken of the Wenfordbridge line there should be at least one other photograph out there somewhere that will help to confirm its structure. Does anyone know of one????
Posted by Yan at 12:10 No comments: