Just to prove I have been doing something relating to Tredethy Wharf during the last few weeks. I've posted a couple of pics below of the next batch of china clay wagons that are now ready for the paint shop.

These five clay wagons are being built using the Ratio kit with modified axle boxes and brake gear. The intention is for these wagons to be empty versions of the early unfitted British Railways Dia. 1/051. British Railways built the first 300 unfitted but quickly converted to vacuum brake but I'm hoping that a few might have remained unfitted until the early 1960s. The next batch will be the vacumm fitted versions.

The next project - Polbrock Engine Shed?

During more nights away for work before Christmas and last evening while in rainy Stalybridge, I've been continuing to consider what comes after Tredethy Wharf. Though I was now fairly certain it had to be Grogley Junction there was still doubt it might be one huge step too far. Ullypug made some good observations on one of my recent RMWeb posts and, though I've been wondering if I could split Grogley up into manageable projects, his comment spurred me on to think a little deeper.

So... after yet more pondering, along with drawing a few more track plans and I've come up with a "cunning plan mi Lord".

How about building Polbrock Engine Shed as stage one?

Either with a single track main line, 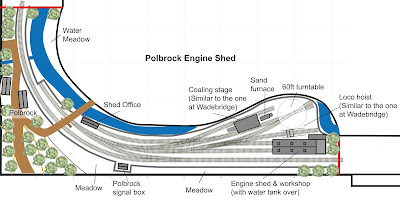 I'm errring on going back to the double track version of Grogley v.14, but even so which ever one I decide on;

I'm starting to really like this idea. It feels like a "no brainer", though there are a few thoughts to be pondered during the next 6 - 12 months before the first timbers are cut for the baseboards.
BUT...and it is a big but... before I even think about another project in P4 I still have to convince myself I am capable of constructing a working loco chassis. There would be no point in building Polbrock Engine Shed in P4 if I can't build a Beattie Well Tank or two in P4...

When home I must put these thoughts to one side and get on with Tredethy Wharf...