Today I braved the cold garage and spent most of my time working on the fiddle yard boards. I wanted to create a screen to mask the fiddle yards but, as my initial intention is to operate this layout from the front, still give me access without having to walk around to the back of the layout. My solution has been to mask off the first 12 inches and have a low front for the remaining 2' 6". I'm hoping this will help to focus the view onto the scenic boards and away from the other 50% of the layout. The other problem I've solved today is how and where to hang the control panel at the front of the layout. All things that probably should have been thought of at the initial planning stages of the layout....

At the end of the day I fetched the two scenic boards out of the house and erected the layout to see if it all looked OK. 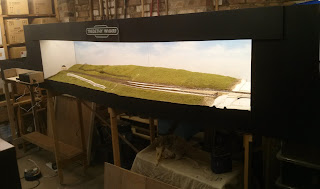 I'm starting to feel a little happier with the layouts presentation for its first exhibition. There is still a lot to do but thankfully it has been advertised as a work in progress. I'd better get back to making trees this evening...
Posted by Yan at 20:43 10 comments:

Why I Started a Small School 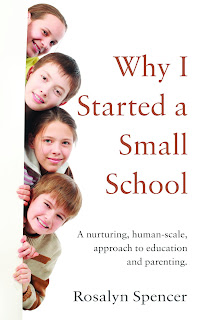 This is the big distraction that is taking up a lot of my wife's time at the moment. She has written a book about her struggle with the schooling system 20 years ago and the circumstances that led her down the path to start a small school. The book is being published tomorrow (27th March) as an ebook. For one day only on the publication date it is being offered at the give-away price of £1.99, thereafter it will be £5.99. If it sells well a printed version will be available later this year

More information can be found on the following links.

Her next book will be 'The Small School Years'. Hopefully there will be more days of distraction where I can take over the kitchen....
Posted by Yan at 20:15 No comments:

I am starting to have some fun creating trees, bushes and ground cover.

At the weekend I'd quickly painted a back screen. Though it's a little rough, for the moment I think it does the trick. By now I was hoping to have had the layout erected in the garage so that it could be worked on as a whole. With the cold weather continuing this is not really feasible. So the task of a back screen was brought forward to reduce the damage to any scenic items while moving the boards around. Also, as the major design fault of this layout is that I've incorporated the end back screens on the fiddle yards boards, I'm giving thoughts about adding removable ends to each scenic board as protection when transporting it around the house or to an exhibition.

I've started to install fencing along with different lengths and colours of static grass to the meadow at the back. At the front it is hoped that the long white sausage will eventually look like a Cornish hedge. The idea is that this hedge will run all along the front, but for the moment the jury is still out on this idea.

Above is my first tree for many a year, in fact only my third attempt ever. My first couple of trees where constructed about 25 years ago on a long lost OO layout and can just be seen here. I think the above is a slight improvement. Not sure where it will be installed on the layout as it was only constructed as a test piece so it might not pass muster.

My missis is being a little treasure at the moment not only is she allowing me to work in the kitchen she's also allowing me to take over the dinning table for a few evenings. Mind you she has a big distraction on at the moment which I'll mention in my next post.
Posted by Yan at 19:33 3 comments:


I've been lucky in being lent a jig for bending rail by Clive from the local Area Group. So with Clive's rail bending jig to hand, I set about  bending lengths of rail to different angles to try and acheive the correct profile.


Once I'd formed a bend that looked correct I soldered four rails together. Then after annealing the rail I made my first attempt to create the four 'S bent' rails in one go so that they would all be the same. In the first attempt I failed at getting the second 'return' bend the correct distance from the first, but lesson learned and the second attempt with fresh rails worked out just about right. The only problem was one rail did not follow the same profile as the other three. Looking at the one at Boscarne there does seem to be a little deformity in some of the rails forming the buffer stop. So I took the view that a little difference in the rail profiles could be put down to 'wear and tear'.


Next, using another jig made by Clive, I create the joggle for the two uprights. This was quickly followed by creating a vertical right angled bend in the two running rails. I've resorted to using nickel silver rail for the running rail as all my attempts at bending steel rail through 90 degrees, annealed or not, ended up with broken or twisted rail. Nickel Silver rail seems to be a little more pliable.

The buffer stop at Dunmere and those at Wenfordbridge all had wooden buffer beams so I've created one from 2mm ply, but I'm not sure if this is the correct thickness. I might add a thicker buffer beam later. I've got to admit that this has not been a very scientific approach. I didn't take any measurements of the buffer stop at Boscarne so I've cribbed approximate dimensions off a Mike's Models GW/LSWR buffer stop. For other dimensions I've applied the rule of thumb. Not very P4 I know, but I'm hoping that as long as it looks right it will be OK


There are a few cosmetic bits to apply, such as the bolt heads on the running and buffer rails, before painting/weathering. I'll then set about bedding it in with ballast, hardstanding, other ground cover, grass and weeds. Time will tell, but it might soon start to look the part... 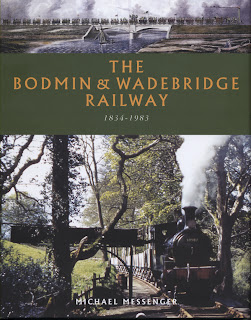 I can't remember the date this book was published apart from being some time leading up to Christmas. Colin, on Yahoo's China Clay Branchline User Group, informed me of its imminent publication, so a copy was ordered from Twelveheads Press. As soon as it arrived, it was confiscated and whisked off to Santa to be wrapped as a Christmas present. Though a little frustrating having to wait, it did add to the anticipation of the read.

I'd purchased a couple of other books by Michael Messenger, Industrial Railways of the South West and North Devon Clay but his recent publication The Bodmin & Wadebridge Railway is in a different class to the previous two books. It must the the most comprehensive book published to date on this branch line. Covering the early canal proposals along the Camel Valley during 1858-1825; different proposals for a railway beginning in 1830  through to its completion in1834; expansion plans and 'what might have beens'; personalities behind the railway; different plans for a branch to Bodmin including all GWR proposals to Bodmin and Boscarne; the eventual arrival of the L.S.W.R.; information on mining in the area and clay workings; traffic workings on the branch for its ealiest days to closure; locomotives that worked on the line, and diagrams of early coaches and wagons. There has been some serious research undertaken to uncover information within the book, which is well written and supported by many photographs and diagrams.

For the last couple of months, I've got to admit that, I'd lost my mojo for Tredethy Wharf.... Instead I've been spending my time on some wargaming projects. Very easy modelling, getting a few more models ready for the wargaming table. Normally these dual interests trot alongside each other quite nicely and over the Christmas break I'd planned on committing a couple of days fully to Tredethy Wharf. Unfortunately due to both me and my wife being ill, which meant cancelling all our Christmas plans and New Year celebrations, somehow knocked me sideways and I lost my enthusiasum for Tredethy. Luckily my enthusiasm for Tredethy Wharf fas been rekindled after helping Bob with his Winterschef layout at the recent Milton Keynes show.

Since the the show I've added the first coat of static grass to the second board, then after not being happy with the roughness of the result on the first board, I've attacked ridges and undulations with a hammer. This has left numerous huge rabbit warrens....hopefully these will vanish with further applications of static grass. Mind you, it might be worth trying to incorporate a rabitt warren and/or a few mole hills into the scene somewhere. 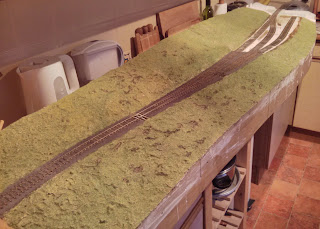 The rails on one board have been painted in, what I think, is a dusty rust colour and I've also started ballasting the track on the same board. I'm using Carrs Ash Ballast fixed in place with a diluted solution of Copydex. After looking at photos of the branch, the ballast might be a little on the coarse side, but this ballast should help to differentiate between the hardstanding mud/soil area around the sidings and the ballasted track.

I must get to grips with the buffer stop soon before working out how to represent the hardstanding areas, after which it will be onto fencing, hedges and trees... The current plan I'm working towards is to have the left hand end more complete than the right for the exhibition in May.
Posted by Yan at 12:11 3 comments: