We have just arrived home after a very enjoyable week's holiday in Cornwall. The fact that it coincided with the Bodmin & Wenford Railway's Spring Steam Spectacular was no coincidence. When the line up of steam power included a T9, an O2, a 42xx along with a Beattie Well Tank and a 45xx, a trip had to be organised. The only drawback was that it happened to be the same weekend as Scalefour North. I had already promised to help with Fish Dock Road but luckily someone stood in for me on the Saturday. With much gratitude this enabled us visit the Steam Spectacular on Friday and briefly on Saturday morning before heading back home. A few photos follow...


The photo of the T9 is probably not the best one we took. I'll post a few more photos of the Steam Spectacular once we have sorted through them all.

During the week I'd taken the opportunity to do a few trips along the Camel trail, taking more photos of Grogley and the Bridges at Boscarne and Pendavey. Postings of these will follow in due course.

A tremendous bonus during the week was finding out that Andrew Jones, the owner of the cottage we were staying in, completed a survey of the line in 1972. His survey recorded how many sleepers were in each rail section; type of sleeper; dates on the chairs; and where occupation crossings were. He also took photos at regular intervals as he walked the line. During our conversations I have gleaned much information which I'm hoping I'll remember correctly. More posts will follow but I must unpack and get ready for Scalefour North tomorrow.
Posted by Yan at 22:54 No comments:

Just a quick posting to show where I am with the rebuilding of the Ian Kirk clay wagons. 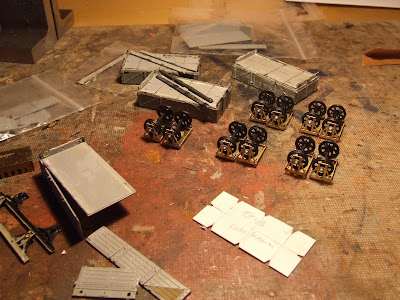 I'd taken the above photo to show progress about a month ago but never did post a blog. The evening had been spent reducing the thickness of two sets of solebars, which can be seen on the relevant wagons. I'd also finished preparing five sets of MJT RCH compensation units. In the foreground can be seen a simple plasticard jig that I'd cut ready for marking the centre lines down the middle of the wagon floor and of each axle. I'm hoping this will help position the compensation units on these wagons and the other dozen or so Ian Kirk clay wagon kits I have waiting to be started. 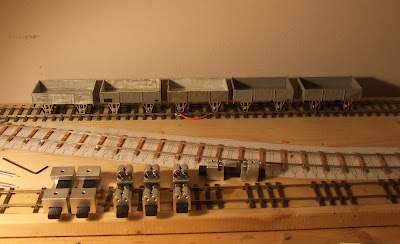 This next photo shows the current state of play and was taken about two weeks ago. I've only progressed five of the six rebuilds as I'm short on wheel sets. Scalefour North is fast approaching where I hope to be able to replenish stocks of wheels and other items. Waiting in the wings are all the thinned down solebars for these five wagons ready to be installed. Once I've a few more wheel sets in stock, I'll bring the sixth rebuild to the same state the the five above. I'll then make a start on a couple of the many un-opened bags of Ian Kirk clay wagon kits to bring this rake up to eight. So I hope to make a little more progress on these during May.
Posted by Yan at 21:08 No comments:

I've not posted any blog entries during the last couple of months due to the many projects I have on the go for both my model railway and wargaming hobbies. Trouble is I don't seem to be making much progress on any of them worthy of an entry in either blog. However, during the Easter break, I'd promised myself that I'd find enough time to complete the wiring of my little control panel for Tredethy Wharf and hopefully get something moving on the layout. 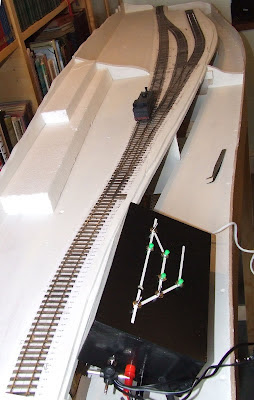 The only problem I had with the wiring was working out which two of the three tabs to use on the 9v DC socket. The 9v supply is supplying the power for the point motor circuits in the control panel. The first attempt seemed correct on the bench when tested with the multimeter but in practice did not supply any juice to the point motors. Eventually the fault was traced back to the socket and after some head scratching it was sorted. I've not installed any electromagnets on the layout yet but do intend to experiment with some hands free couplings. To this end I have installed five push buttons on the control panel including all wiring between control panel and the layout. Well there are only four at the moment as I ruined one with a little over zealous soldering.

After running the loco up and down for a while I found a few little gremlins to sort out. To banish one gremlin might require the re-laying of track at the far end where I've installed a continuous check rail. If I do need to re-lay this section I'll use copperclad sleepers next time. All of this section will be buried under road and a dirt track between two buildings so in hindsight the used of ply sleepers and chairs on this section was a little extravagant.

I feel a little happier after my efforts this weekend, but I'm also a little frustrated that it has taken so long to get this little layout to this stage... Anyway, onwards and upwards, I'll keep pecking away at it and one day I might even finish it...
Posted by Yan at 21:29 5 comments: