I've gradually been building up a collection of photographs for the Wadebridge - Bodmin - Wenford Bridge lines and thought I'd share a couple of my recent ebay purchases. Neither are photographs but tickets issued for the lines. The first to catch my eye was a ticket for travel between Grogley Halt and Bodmin. When spotted I thought I just had to have it as Grogley is the inspiration and central to this project. The ticket ties in a little bit of reality to my fiction. 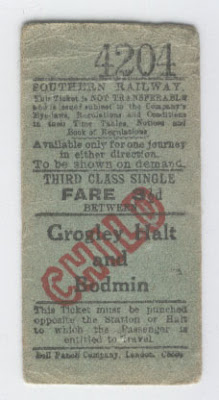 The second is a passenger ticket for the goods only Wenford Bridge line. As my 'Plank' Tredethy Wharf is based on this line, again I thought this also had to be added to the collection. 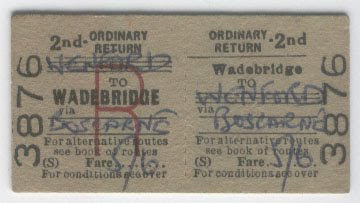 Apparently passengers were allowed to travel in the Guards Van. I've also been informed that a Queen Mary brake van was sometimes added to the daily goods train when passengers were being conveyed. No printed tickets were available so tickets had to be hand written. What a nice piece of railway history.

I don't know the age of, or personal history behind either ticket, if anyone has any ideas please let me know.
Posted by Yan at 22:32 No comments: 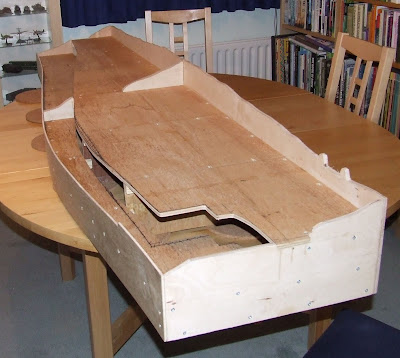 Well, there it is, The Plank!
and 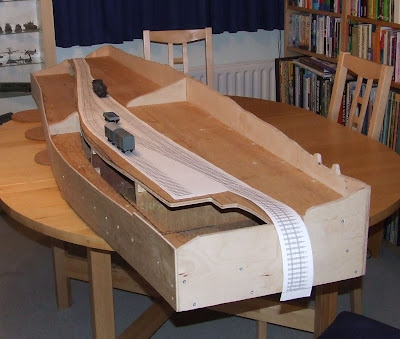 The Plank with track plan.

At this end of the layout I cannot decide on how the cottage / road / land contours will look, so the front profile board will be cut later. I also need to decide on the height of the layout so that I can start to construct the supporting frame/legs, but at least I am at the point where serious thought can be applied to track laying. Just need a little tweak here and there on the track plan and things will start to get interesting.
Posted by Yan at 22:27 4 comments:

I recently purchased a DVD produced by Branch Line Video titled 'Memories of the Bodmin & Wadebridge Railway'. I had mulled over the purchase for a while but as the front cover had a picture of a Beattie Well Tank at Dumere Crossing I thought it might contain something of interest on the Wenford Bridge line. Being not sure what to expect I was, after viewing, extremely please with the purchase. I would highly recommend this DVD to anyone interested in this area and the workings of the Wenford Bridge line. 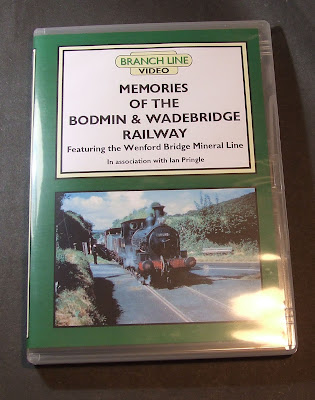 It comes with two DVDs, the first covers the history of the line starting with brief footage of the North Cornwall Line then moving onto the main subject highlighted with many stills and brief cine film. Of more interest to me is the second DVD. It has cine film footage of two trips down the Wenford Bridge branch. One starting with footage of workings at Wadebridge and progressing to an empty clay train working hauled by a Beattie 30585. The second of a Brake Van special hauled by 1369. Both have anecdotal commentary from men who worked the line. Footage is not surprisingly showing its age but still fantastic to see.
Posted by Yan at 21:03 No comments:

I was disappointed about not being able to get up to York this year as I would have dearly liked to have seen Wheel Elizabeth in the flesh. York does sometimes throw up some interesting layouts and James' report mentions Mini MSW which would also have been worth seeing.

Anyway I did manage to steal a couple of hours away from chores and paid a visit to the Lincolnshire Wolds Railway. It's only 15 mins away at Ludborough. I'd not paid them much attention to this project but 'her indoors' kindly suggested a visit for a break. This Easter weekend was the official opening of their second station at North Thoresby. In celebration they had organised a Steam Gala. 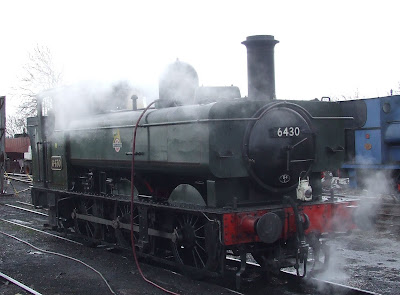 A big attraction, especially for me, was a visiting Pannier tank 6430. I dutifully took the opportunity to take photos of this engine for a possible future project. Some excellent photos of the weekend can be found on Dave's Railpics of Lincolnshire web site .

By all accounts the Steam Gala was a great success. It attracted a tremendous number of visitors over the weekend with many full trains. I'll have to pay them another visit soon.
Posted by Yan at 22:14 1 comment: