I have posted a new entry called "Clamping and Gluing" on a new blog dedicated to my latest project, Rospeath Lane. If you would like to continue following my progress with the new project could I invite you over to: https://rospeathlane.blogspot.com/

Grogley Junction is mainly about creating a model base on the Bodmin to Wadebridge line and is therefor a mix of LSWR & GWR. Whereas Rospeath Lane is firmly ex GWR which made me feel that this was not the correct place to continue posts. Over the next few days I'll remove all posts relating to Rospeath Lane from these pages, they have already been migrated over to the new blog site.

This blog will be kept live as there may well be further posts regarding Tredethy Wharf.

Thank you all for following my ramblings and leaving comments which have all been gratefully received. Hope to see you all over on the new Rospeath Lane blog.

I must apologise to followers of this blog. My wife informed me that there was a problem as she was not now a follower. When investigating I found a quantity of comments awaiting moderation and approval. I’m still trying to understand why I’ve not received emails when comments have been left. In the meantime I have approved all genuine comments and hope you will all forgive my oversight.

A couple of Videos of Tredethy Wharf

I'd forgotten about these two videos that were taken at the Immingham show back in 2019. Just thought it might be worth posting links to these videos on YouTube.

Deciding on the next project

As previously mentioned, my Man Cave has been reduced in size, so Grogley Junction is now a non starter. For the past year I've been musing over what will replace it and I now have five possible ideas which are:
Below are the five plans that I've drawn to evaluate each proposal.

1)
Though I've posted a number of thoughts on this one, I've never been fully happy with the track plan. I have plenty of rolling stock (and this is certainly a possibility) but not sure if I'd be totally happy with the result or feel I'd achieved enough when completed.

2)
Oh yes this is a definite possibility as it would be the ideal project to follow on from Tredethy Wharf. I have numerous photos of the junction including many of my own of the bridges from the river level. I'd have no excuse not to produce a convincing model. I've applied a certain amount of compression to the track plan, even so, there are a couple of anomalies that I'll have to live with. The first is I've had to curve the Bodmin North line to the right not left (away from the Bodim General Line as in the real junction) but still feel it will convey the correct feel of the junction. The second is that to have a convincing length of sidings I'd have to operate the layout with the Man Cave door open. Though the board between the Level Crossing and fiddle yard could be excluded for operation at home.

Well this was an early front runner but with every man and his dog building a model of Bodmin General, along with my thoughts that I'd struggle with not meeting the standards that North London Groups achieved with their model, it has slipped down the list.

4)
Bodmin Road became a distinct possibility after I acquired a number of P4 locomotives from a modeller who was reducing his collection. After drawing numerous plans I think I have decided that is is not really practical due to not having enough space in the fiddle yards and also access to the Up fiddle yard. Just cannot make it work in the space available... Shame.

5)
Finally we have my proposed Engine Shed. This would fulfill a long-held ambition, one that I never thought I would be able to contemplate until a couple of years ago with the acquisition of a number of Western Region P4 Locomotives. My outline thoughts for this project are (i) to be based on a GWR Engine Shed; (ii) it has to be scenically based and not just a flat board with mainly track; (iii) It must have some other interest to justify its location and not just be a diorama to display a collection of locomotives. The above is loosely based on Leamington Engine Shed. I've incorporated four Carriage sidings that would be operated in conjunction with loco movements along with three coal wagon sidings. The idea is the landscape would slope up from the river to the back.  The carriage siding would be lower than the Engine shed and yard, then the Coal Wagon sidings being slightly higher still.

My current thoughts are it is a close thing between Boscarne Junction and the Engine Shed.

A good friend, and a fellow Tredethy Wharf operator, offered to paint a few figures for my Gricer Train. I gratefully posted half a dozen Dart Casting figures off to him.

I've got to admit that I was suitably embarrassed in the speed these figures were returned. Within a couple of weeks they promptly appeared in our post box. He even fashioned a camera on the young woman to make the figure more appropriate. 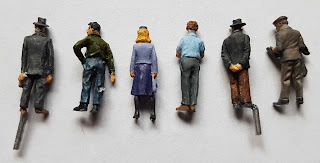 I've not put paint on a brush for many months and to have these returned so quickly was an excellent kick up the proverbial. Along with little people for the Gricer, I also require a number of footplate figures along with guards. Out came the tray, and figure painting has commenced... 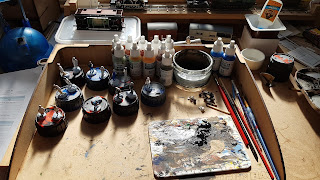 With all that is going on currently with the COVID-19 lockdown, the distractions of playing golf has been removed. I now have no excuse not to get more figures painted.
Posted by Ian at 14:04 No comments: 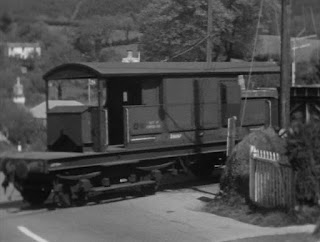 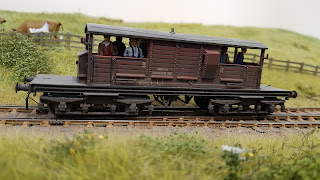 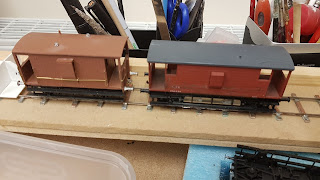 Two years ago a member of the local Scalefour group took on the challenge of building a chassis for a Perseverance kit of a Beattie Well Tank for me. I collected it around March last year but unfortunately it was pointed out that the boiler was not a good fit between the splashers. Even though I am now retired, this problem, along with last year's distractions of house extension building work; holidays to Vietnam and Sweden; short caravan breaks in the UK; being seduced into playing more golf (resulting in winning a few competitions); and taking Tredethy Wharf to three shows - I've not progressed the kit any further. Oh the excuses, excuses and more excuses - or was it just plain procrastination? This year I think it has to be a priority that I make progress on this Perseverance kit to get it running on Tredethy Wharf.


The above photo shows the boiler is not fixed in place as there is still a gap between the boiler and splashers. Not knowing which part of the kit needs correcting has possibly been the main reason why I've not continued the build.

Then Eureka! While going through back copies of magazines, I found a drawing of a Beattie Well Tank in a 1985 Railway Modeller drawn by Ian Beattie. The wheel base measurements were accurate which made me believe that the drawing had been reproduced correctly and in proportion. Assuming the boiler had been drawn correctly, it indicated that the kits boiler is 0.1mm under size. I don't think I can complain too much about that, therefore, I can fit the boiler and work on the splashers to fill the gap. At last I'll be able to 'persevere' (pun intended) with this kit and move the build on...