How's this for signal box?

This is a late posting but we're back from our trip to Sevilla (Seville). We flew into Malaga so we had a 2.5 hour train journey between Malaga and Seville. The option to travel via bus was somehow not a considered option. Overall we were both very impressed with the Spanish Railway system and the service provided by Renfe. The outbound journey was on a three coach stopping train calling at almost all stations on route. Leg room on the train was outstanding. I'm 6ft 3 inch and I probably had 6 inch knee room left between seats. The train was full.... with no standing passengers, no rubbish around station nor on board and the train running to time....... this was on a 5:00pm departure from Malaga .....and all for 36 euros each return....!!!

We did however cause major confusion within our carriage on the outward journey. When booking the tickets a couple of weeks before our trip I seemed to see an addition, optional, charge to reserve seats which I did not include in the ticket price. On boarding the train at Malaga, after stowing our luggage, we took the first available seats in the carriage and settled in for 2.5 hour journey. We were then approached by a Spanish lady stating that we were in her seat...... After a struggle with translation she politely offered to move to our allotted seats, luckily in the same carriage. Unfortunately this had a knock on affect as all seats are allotted on the tickets. You could see the Spanish muttering under there breath but once the musical chairs was put in motion it was very difficult to put right....... We sat in our correct seats on the return journey. 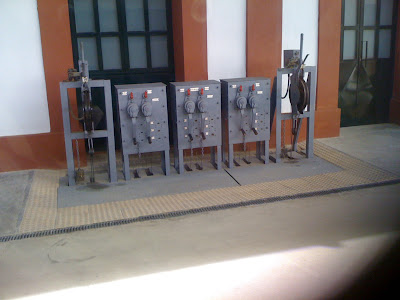 The above was worked by a member of the station staff scurrying across the platform pulling one lever, winding another and the train was on its way again. 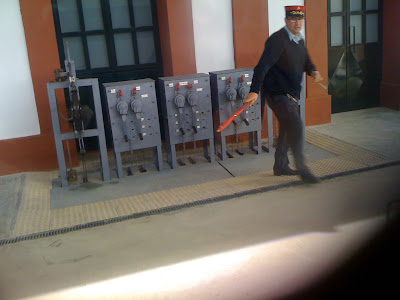 Watching the trams go by

Just spent a very pleasant day wandering the streets of central Sevilla where there is a very small tram system. One line no more than 2 kilometres long with four stops. It must be one of the shortest public systems in the
world? Still nice to watch though.

-- Posted from my iPhone