I don't seem to have had much time for any modelling since June. The original plan was to have six wagons completed by now leaving me time to build a couple more and pick out the best for the Leatherhead show. At this point in time, with only three weeks left in which to find modelling time before the show, I've still two wagons to finish building before any enter the paint shop. Best laid plans and all that........ Anyway it's not all doom and gloom. Today I have been able to find a few hours to work on the old Airfix kit and Parkside's slope sided wagon.

In building the Airfix kit I'd removed the over scale hinges. So picking up the model this morning it was time to recreate the hinges. 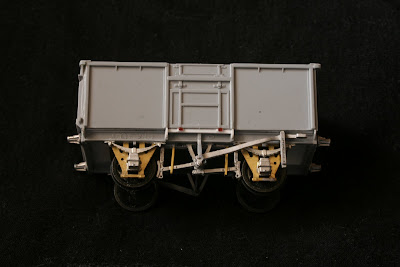 Not as neat as Geoff Kent's example in his book "The 4mm Wagon Part 1" but hopefully my attempt will pass reasonable examination.......especially after a little paint is applied.

Next was the slope sided wagon. I do like this wagon. Well that was until I started to build it..... it's becoming a pain especially as I've made a right c**kup of appling the first of the four side stanchions that are either side of the door. Previously to get the two elements of the sides to fit snugly I'd filed a little off the join. Then I applied a wash of grey paint along the join to see if I'd been able to disguise it. At this point I was very pleased with my progress. When I then presented the first stanchion to the side it seemed it would not fit. Out came the knife and a little was trimmed off the top. After carefully gluing in place I realised that it was too short......Ahhhhh... 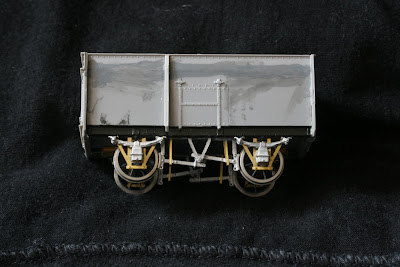 At this point after much cursing this wagon had been put to one side, while I got on with the others. Over the last few weeks I'd looked at it a few times and was even contemplating scrapping. But today I decided to have a go at trying to salvage the mess.... A few bits of plasticard later and I think I might be able to get away with it. 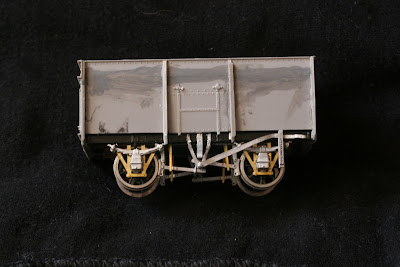 The corrected stanchion looks a little long in the photo so with with a little more work it should be OK. After all, as long as the mistake does not jump out at you, once the wagon is part of a train of wagons it will just be another wagon.

There is still work do be completed on the other side, applying the stanchions, second V hanger, brake lever, door stop, then it's adding the buffers and couplings. Then all six wagons should be ready for the paint shop......There's a glimmer of hope that I might have these finished for Leatherhead.