What a splendid day it was. 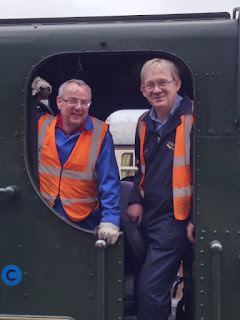 As an early birthday present a 'footplate experience' at the Bodmin & Wadebridge Railway was organised by my daughter and very good friend Nick Cook. This all took place at the end of the Easter holiday period.

Though I'd cottoned on to what was happening towards the end of last year I didn't realise that:
1) Nick and his family were going to be in Cornwall the same week as ourselves.
2) Nick had booked himself on the same day's driver's experience.

During the week there was much subterfuge in keeping myself away from the Cook family. It had been planned to be a total surprise for me that Nick was taking part in the day. My daughter and son had great fun in communicating with the Cooks, even meeting up with them during the week without me knowing. On the Thursday unbeknown to myself we were all on the Camel Trail. Apparently we passed each other on at least two occasions either on our bikes or while one group had stopped for a bite to eat. I was later informed that during the day my son was not texting a girl but texting the Cooks to keep them informed of our whereabouts. This was all to keep me in the dark until the Friday morning when Nick walked into Bodmin Station to my exclamation of 'What the **** are you doing here...!' to which he replied 'You didn't think I'd miss out on this day did you?' I've been told the look on my face was a gem! 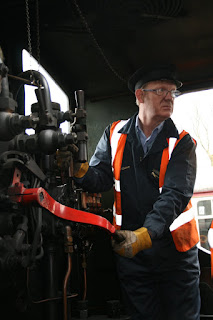 After all the introductions we were soon taken to our steed for the day, a GWR Pannier tank number 4612. It just needed a top up of good Welsh coal before we were on the footplate for the first instructions. The experience of being on the footplate during the 1:37 climb from Bodmin Parkway to Bodmin General was awesome! Let alone with my hand on the regulator; shovelling coal into the firebox, plus keeping an eye on the pressure gauge; coupling & uncoupling the loco from the coaches during the tunarounds; pulling points at Bodmin General and Parkway; topping the side tanks up with water; along with listening to the driver and fireman passing on their knowledge. At the end of the day we had great pleasure in giving a modicum of help in disposing of the loco.  I even got chance to have a very quick visit to the signal box. Much was learnt, and excellent memories made... 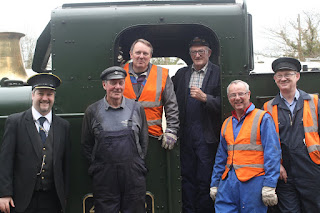 It all went far too quickly for us novices. The crew and staff at Bodmin were brilliant - very friendly and accommodating to us and our entourages. My heart-felt thanks must go to all who had a hand in organising the day. I don't think it is surprising that in most of the photos both Nick and I are grinning from ear to ear. I just want to do it again... 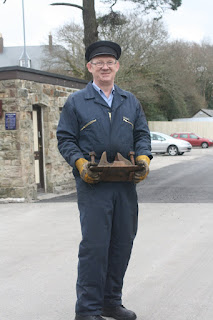 As a memento of the day both Nick and I walked away (after giving a small donation) with a genuine GWR standard 2 bolt chair, I wonder if the boss will allow me to collect a few switch chairs...just as a discussion point (no pun intended) with our cottage guests?  :-))
Posted by Yan at 07:24 1 comment:

Last year was a bad year for the train set

2015 turned out to be a year for wargaming. The fact that is was 200 years since The Battle of Waterloo enticed us to put on three ofthe four main battles that took place during the 100 days of the Waterloo campaign; Quatra Bra; Wavre; and the big one Waterloo. It took us most of the year to paint and collect enough figures for these games and especially for Waterloo but eventually we mustered well over 2,500 figures for game. More can be seen here.

2015 also saw us go though the procedure of gaining conservation planning consent for new windows along with planning further internal changes. With Waterloo out of the way it has been on with the internal building projects. This has entailed just about gutting our little house and putting it back together. We started by ripping out the existing stairs, kitchen, bathroom. Demolishing internal walls upstairs to create a new bathroom upstairs along with a slightly smaller single bedroom than making good with new starircase. We then carried on downstairs with solving some damp issues, a new kitchen and utility room, then installing pocket doors between dining and sitting area. Only two rooms have not been affected, both being bedrooms and both having to store, along with the "Man Cave", all our furniture and belongings. So again access to the layout has been severally restricted during this time. It has been interesting to say the least but hopefully we are in the final straight. All the plastering should be finished this week, a log stove will be installed at the end of the month in the sitting room area and then it's on with decorating and new flooring.

I'm so sorry that it's more excuses why this blog has become stagnated but I'm working towards mid May to get everything finished. Once finished the boss has promised I can spend as much time as I need in the 'Man Cave' getting the layout ready for the 2017 Lincoln show.

PS. To answer the question posed last April. I have managed to dyed some of the rope material and carefully coloured the rope on the first wagon that ropes were applied too and it looks good. So the answer is a resounding YES, ropes will be added to the other clay wagons. Photos to follow...