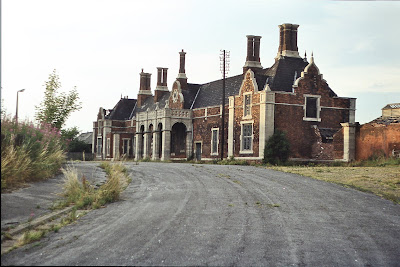 Louth would make a great model, if someone has the space. It was situated on the old Great Northern main line from Grimsby down through the centre of Lincolnshire to Boston, Peterborough and London. It carried large amounts of goods traffic to/from Grimsby, Immingham and Scunthorpe. In its hayday had an overall roof, served two branch lines, had a small engine shed with turntable, there was also extensive goods sidings with a large goods shed. Through traffic included fish from Grimbsy, iron ore for Scunthorpe, coal from Immingham, passenger trains to/from London, mail trains plus all other pickup goods, local passenger workings. Too bigger project for me but it is a little known line that is crying out for someone to pick up the baton.

I took a series of photos of Stations on the East Lincs line during late 70's/early 80's. I cannot state exact dates but the 6 colour slides of Louth do have 1979 penciled on them but I'm not convinced this is correct. 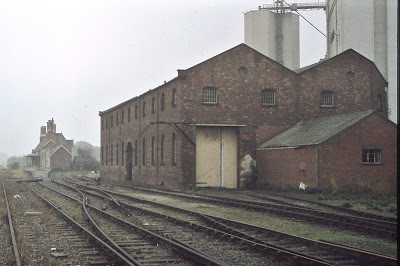 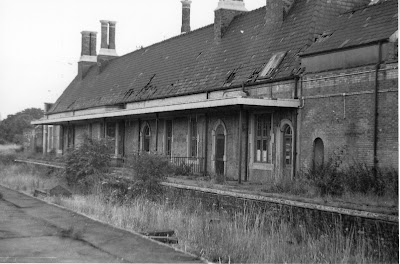 There was also an article on Louth in the February 95 Steam Days magazine.
Posted by Yan at 20:08 No comments:

Well this is it, the test track!

A little bit more that the plank with a little track and a couple of points but should be interesting to build. It should also throw up some good questions along the way.

I've been chewing the fat over the last couple of weeks about baseboard sizes and this is hopefully it. I've ended up with sizes that should fit into my little 306 leaving space for legs, stock boxes etc. Basic baseboard length is 3ft 6" long by 2ft wide, with two hidden sections being 3ft 6" by 18" and one being 3ft 6" by 12". Overall layout including hidden siding will be as shown below.

I've decide to leave off the end of the Mill building shown in a previous plan so that I can reduce the baseboard width. The only item I'm not sure of at the moment is the house adjacent to the signal box. I'm not including it for the moment but as the project progresses it may well make an appearance.

I realise that in making this a Y shaped layout will complicate operation for one person if ever I get invited anywhere (a little presumptuous I know but one can live in hope :-)) but I felt it was the only way to finish that end of the layout off. If left as my previous plan the small amount of shunting would have always entered the hidden siding by some distance. By adding a little more length at this end should reduce this to a minimum. Also by adding the interest of the River Camel with its two bridges and embankments gives me some practice for features on Grogley.

I now need to decide how to build the baseboards. The last layout I build was very basic using 2" x 1" with chipboard tops. This layout will have to be a little bit more sophisticated. Open topped construction looks favourite using techniques from Barry Norman's and Iain Rice's books. I have also been interested in some threads on the P4's forum pages about baseboard depth. I had not thought about point operation but have seen Tortoise point motors being used on many layouts and like the slow action. To accommodate Tortoise's under the baseboard it would seem that the depth of baseboard from track bed to bottom edge needs to be a minimum of 8" to give protection to these motors. This should not be too much of a problem considering I am now including the river and bridges.
Posted by Yan at 11:08 4 comments:

What a project......I'm not one for continental railways, not yet anyway, but I have to admire this layout. A layout were a train has a journey, even a timetable will have a meaning. Oh to have that sort of space. I'll just have to keep on dreaming. In the mean time I'll watch this layouts progress with great interest.
http://grimstadline.blogspot.com/
Great blog. Keep up the good work......
Posted by Yan at 23:00 No comments: 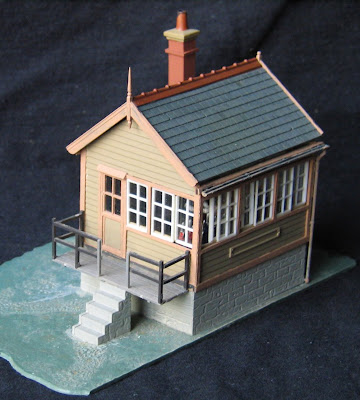 Another discovery.......looks like this could be the signal box for Boscarne.

This is a Ratio kit that I started may years ago for what layout I cannot remember. I've also started to fit a Wills Interior kit but not put the instrument shelf in yet. Still got all the extra bits to fit though. One finial is broken but that can happen in real life, so not too bothered about that. I cannot remember how I fashioned the landing nor why but does require finishing and painting. 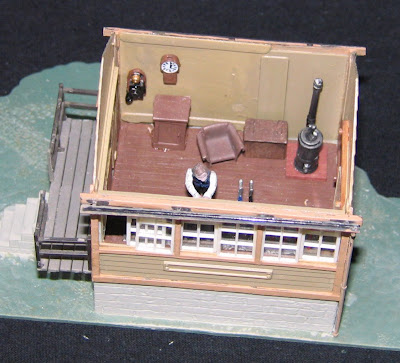 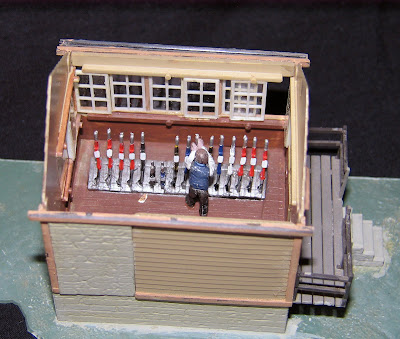 It looks too easy (57xx conversion)

I have two 57xxs to convert to P4 and EM gauge society and Ultrascale offer conversion packs. It all looks too easy....The following link is to Ultrascale's instruction sheet and should automatically download the pdf.

This will definitely be my first attempt at a P4 loco.
Posted by Yan at 21:43 2 comments:

Just been browsing the web and come across this web page,

Adding it to my blog as reference as I have one of these to build. There are some interesting comments made about the kit which I may need to identify what age kit I have.
Posted by Yan at 20:21 No comments:

Well were has January gone? One month on and not a lot has happened with the project. I've been spending most of my spare time consolidating my wargaming projects and finishing off units that have been on the bench for far too long. Still have a few to paint but, while painting, I have been mulling over baseboard sizes for the Boscarne Wharf layout. As I could be moving house in the next couple of years I have to plan this layout to be portable. Nether do I think I will be changing the car for a while so it will need to fit into the back of a Peugeot 306. Not a lot of space.

Looking at track plan and available space in car, 3.5 foot is the maximum board length. 3.5 foot legths also fits the track plan well making the scenic length 10.5 feet long and adding a further 14 inches to the Grogley end increasing the temptation to add a halt. I've not finalised width but I'm considering that junction end be "Y" shaped following the shape of the track plan. Thus giving baseboard ends that are 90 degrees to the track and not cutting across at an angle. This would make this end approximately 2.5 feet wide depending on scenics. This would also create two narrow fiddle yards splaying out at an angle to each other. (Would this create a problem in operation?). The other boards could be as narrow as 18 inches. I may be able to get away with three square baseboards 3.5 ft x 2 ft but keeping the boards narrow will mean less scenic work. Also by introducing an irregular shaped baseboard will test my fledgling carpentry skills. I do need to keep in mind that this is supposed to be a test layout. It is better to fail and learn than not learn at all.
Posted by Yan at 12:33 No comments: