What a brilliant weekend this was from arriving to leaving. 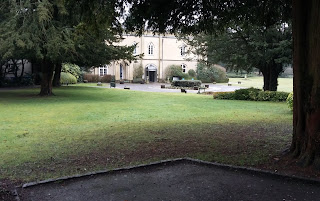 I'd been very apprehensive about attending a Missenden Railway Modellers Weekend. Still regarding myself as a newbie to the hobby with much to learn, then thinking I'd be putting myself in a place with talented and renowned modellers was a little daunting but I need not have worried. On arrival I was given a very warm welcome by David Brandreth and immediately guided to the 4mm kit builders work room. There were offers of help to unload my car along with introductions to the two tutors.

Other attendees were already seated and working so once I'd set up work started straight away. The bar opened at 6pm for a cheeky pint (or two) before we sat down for the evening meal which was certainly adequate. This was following by a short introduction to the weekend. There were 12 newbies attending and we had to give a two line introduction to ourselves. It was surprising to find I was not the only one attending with problems building their first loco chassis.

My intention is to eventually build at least three 57xx Pannier chassis along with a 94xx, as all have the same wheel base. Friday evening was spent building a jig for these locos. I'd previously used my lathe to make three stainless steel axles with spigots. The remaining task was to ream out the previously drilled 3mm holes in a Tufnol block to accept these axles. This turned out to be a very time consuming job and it was soon 10pm which I thought was kicking out time. Much to my surprise we were allowed to work on as long as we liked until the early hours if we had the stamina. I called it a day at 10.30pm with a few brass bearings reamed out to fit the jig.

After a hearty breakfast at Chartridge Lodge on Saturday morning (unfortunately I didn't book early enough to get accommodation at Missenden) I arrived at 9.15am to find most attendees already hard at work. My first task was to laminate the articulated coupling rods that came with the Comet Chassis kit. Using the jig this was an easy task.

On examination by Tim Watson (one of the tutors) he pointed out that I'd been far too gentle with my soldering. His positive criticism was followed by advice and a demonstration on how to improve the look of the rods making them look more like solid chunks of steel. It was back to the jig and the coupling rods were reworked. The improvement was excellent! After this it was very slow progress with fitting the bearings into the hornblocks. Followed by soldering the hornblocks to the chassis sides. At the end of the day, though I was pleased with the result, I was a little disappointed with my progress as I'd hoped to have had the chassis sides soldered together by the end of Saturday.


My slow progress during Saturday might have been due to attending a couple of demonstrations. One on Resistance Soldering given by David Brandreth and one on Weathering by Mick Bonwick. When booking I'd  been torn about which workshops to attended so took the opportunity to pop my head into other workshops to see what they were about. Track by Norman Solomon, Back Scenes and Scenery by Paul Bambrick along with Weathering by Mick Bonwick were all ones which I'd seriously considered attending. During Sunday morning I attended a demonstration by Norman Soloman on track droppers during which he parted with other snippets of advice on installing wiring to the track.

Sunday started with taking another look at the gearbox. Even though the final gear drive was absent it was temporarily constructed so that the position of the frame spaces could be finalised. I then proceeded to construct the chassis twice! The first attempt was a touch out of square... why this should have been the case I don't know. It was put together on the jig so in theory all should have gone together nice and square. With advice from the tutors (Tim & Tony Gee) I then used a jig lent to me by another modeller and this time the chassis was soldered up square. The compensation beam was then quickly put together before I started on installing crankpins in the wheels and quartering the wheels on the axles. At the end of the day (3pm) all my hesitations, mistakes, missing drive gear and spending time absorbing the Missenden experience had accumulated in slowing down my progress in producing a running chassis.

Even though I did not achieve my planned objective I feel the weekend at Missenden was a total success. I came away with renewed confidence about by chassis building abilities. I've learnt much about techniques and tools not only from the two tutors but also other modellers especially Paul Willis. In the 4mm Kit Building Group there were people building not only locos in 4mm and 3mm in brass or whitemetal but also wagons in brass and plastic. Seeing projects that other modellers were working on in different scales and sharing experiences rounded the weekend off into a most enjoyable experience.

If the opportunity arose would I go again?... Absolutely.
Would I recommend the weekend to others?... Most definitely.