Missenden has sown a seed

Since Missenden I've not had much time available for visits to the Man Cave. What time there has been has been put to installing Sprat & Winkle couplings on a few more wagons. With the Easter Weekend looming and the thought of having at least two full days of the four free for modelling I'd not been too worried. But how situations can change in a moment. During the week prior to Easter, we had a request from the Fostering team to take on an emergency placement. The little lost sole is with us for at least a week, possibly more...

On evenings away from home I've been putting some thought to tasks I would like to complete on Tredethy Wharf prior to Scaleforum. Thankfully it's not a long list. Apart from adding/improving rolling stock I feel I need to add a couple of trees, along with a couple more fiddle yard cassettes with some minor modifications to the existing cassettes. This would have been it if I'd not popped my head into Paul Bambrick's workshop on Back Screens at Missenden. I was very impressed by the work being created in the workshop and it sowed a small seed of discontent with my own work.

Standing back and taking a second look at the back screen on Tredethy Wharf made me realise it might now not be up to standard. It was created very quickly early in the layout's construction to enable me to present it at an exhibition in a reasonable "state of progress".

No work has been done on the back screen since.


After a little Googling on back screens I discovered that Paul Bambrick has written a book as well as a few magazine articles. Having duly purchased his book I found it to be a well written in a friendly encouraging style. This has made me seriously think about creating a new back screen for Tredethy Wharf and that I might be able to improve on the current one. The objective would be to add some depth to the scene. 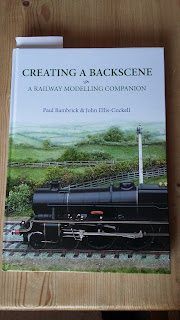 So a new back screen for the layout has been added to the list as a possible "to do" before Scaleforum. It will be interesting to see what if I can make an improve on the current back screen. Just a shame I've not progressed the layout much over Easter.
Posted by Yan at 19:50 1 comment: