Below is a screen shot from Google Maps of the proposed location for Grogley Junction’s Engine Shed at Polbrock. Last time I was there I remember this area (to the north of the road bridge at Polbrock) to be reasonably flat between the old track bed and the river. Scaled down to 4mm scale it would cover an area of approximately 12 foot long, from bridge to trees at the top just short of the river, by 3 ft 6 inches at its widest point. 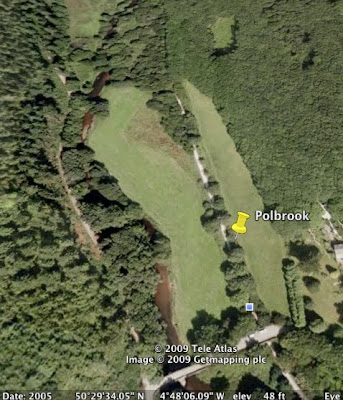 Below is my first interpretation of how this engine shed might have looked. I've reduced the area that the engine shed to under 8ft long and the width down to just under 3ft.

Anyway…….I've tried to let the actual location dictate the layout of the engine shed but must admit that there is a little of GW’s shed in the design. Hope that carries no offence to the staunch LSWR followers. If I do build the layout it would work mainly as large moving diorama for displaying locos. The main line, running though the layout at the back behind the coach sidings, would initially be non functional.

I’m thinking of basing all structures on those at Wadebridge. The engine shed being constructed from wood cladding with a brick base to the water tower. The coaling stage was a platform with a corrugated roof where coal was shovelled from wagons on one side and loaded onto locos the other. With that said I'm still trying to research other LSWR engine sheds for ideas. Wadebridge's original engine shed was sympathetically extended in a rebuild. I'm proposing that the LSWR, instead of this rebuild, built a brand new engine shed at Polbrook so they might have considered a new stone structure rather than move the original wooden one.

I have increased the size of the turntable to 55 ft as 50 ft seems very tight to turn an N Class loco. A 50 ft turntable must have been big enough as Wadebridge had a 50 ft turntable which was used to turn N Classes. But a 55 ft should give a little bit more lee way when trying to operate the layout and position an N class on the turntable's deck. 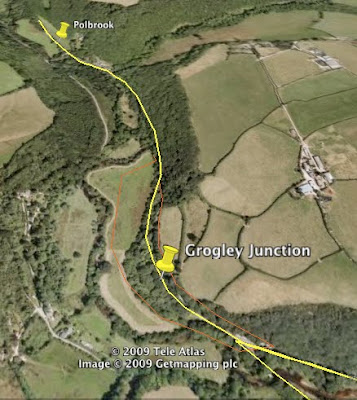 Overall I like this plan and think it has great potential. Viewing the engine shed across the river between a couple of trees with the coach sidings and a gentle tree lined embankment behind seems just right for this area. Perhaps there are couple of Maunsell two coach ‘P Sets’ in the coach sidings with an O2 backing on to one of them? A couple of Beattie Well tanks and a 57xx Pannier on shed while an N class is being turned and prepared for its next duty. Nice.......

Overall, with scenic areas, the layout is big at 28 sq ft. This makes me wonder how practical this track plan might be especially as it has been drawn with only two baseboards each being 4ft x 3ft 6in. I need to discuss this with the new boss. :-))

BUT….. possibly more importantly for this project, designing this layout has started me thinking about Grogley Junction again. I now have to decide if there is enough room or not for an engine shed and carriage sidings at the proposed site for Grogley Junction. The above plan looks good for a stand alone layout but for the whole project it has to be right and fit in. If there is enough room within the environs of Grogley Junction for an engine shed I doubt that the LSWR would have built a remote one 500 yds up the line.

Oh well, one thing is certain I’m enjoying using Templot and I’m also enjoying the thought process in creating this alternative universe. Not sure that I’m any closer to a layout but more will definately follow......
Posted by Yan at 21:31

I like that. it seems "real". But I'm now turning into a person who is dead set against straight edged "rectangular slab" shaped baseboards. How about having the front edge of the baseboard follow the curve of the river?