Since the last post on Tredethy I've progressed the layout a little further. A recent visit by Gordon, when he brought along a couple of his locos and a few wagons, did show up a few little issues with running. One point's switch blades were still not closing with the stock rail in one direction. This was soon solved by replacing the spring wire that was supplied with the Tortoise motor with 0.9mmm spring wire from Gordon's own stock. Another point was being temperamental and though most wagons ran through it there were still the occasional derailment...The thought was that upgrading the spring wire might help on this point. The main issue that presented itself was a loose wire in the plug between the layout and the control panel, even though the last time I applied power to the layout it all worked fine. At the start of the evening this loose wire caused a short that was affecting point operation and the fault took a good hour to track down and solve. This has shown me the problems that can happen with a sectional layout that is constantly being moved and knocked. Since Gordon's visit I've purchase some 0.9mm wire and upgraded the two remaining points and they both now seem to work more consistently with, so far, no derailments 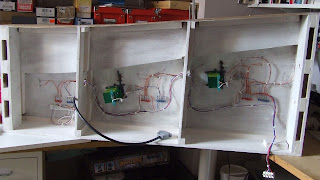 With the track fully commissioned I've tidied the wiring on both boards and retested the layout. Though this is a very simple layout with minimal wiring this was still a task that took a couple of evenings.

Then, after spending a couple of weeks on my wargaming projects, and a couple of days away at Stratford upon Avon trying to educate myself  with a bit of Shakespeare (probably too late in the day...), I've started to have another look at Tredethy. What is the next stage, ballasting the track, painting rails and chairs, or putting in the scenic sub base? I'm itching to get on with the scenic side of this test plank, so spent a few hours over this bank holiday building up the sub base on one of the baseboards with blocks of polystyrene . 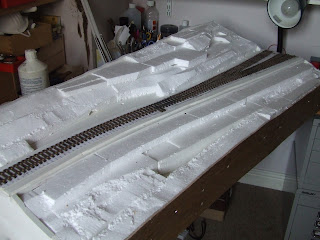 There is still a bit to do on this first board before starting on the second. My intention is to sculpt the the polystyrene into the approximate desired contours before covering with a couple of layers of ModRoc. Once the ModRoc is applied I'll paint the rail and chairs then ballasting the track before making a start on the ground cover on the two boards. Not sure if this is the recommend order of things but it seems right to me.
Posted by Yan at 21:04