In a previous post I alluded to a building project that will have an affect on my modelling hobbies. This was the building of an extension between the house and garage (Man Cave) creating a small study and a passageway through to the garage. This project also included stealing a good seven foot off the length of my "Man Cave" for a downstairs shower room and toilet. Even though I've lost space I now have direct access to the "Cave" from the house.
All in all, losing seven foot off the length of the room along with having access direct from the house has enabled me to create a more cosy welcoming space in which to while away the evenings. The only down side is that, due to the reduced space, it would seem my proposed Grogley Junction project is now "dead in the water". 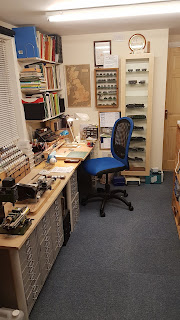 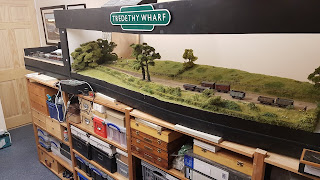 I'm still getting use to the new room and sorting through all the stuff I've collected over the years but it's coming together nicely.
Posted by Yan at 09:26