Back to the big project - Signal diagrams

Can I suggest you settle down somewhere quiet with a glass of your preferred beverage before embarking on reading this blog entry... it's a bit of an epic... :-))


While I have read a couple of books (British Railways Signalling, G.M. Kichenside & A. Williams and Pictorial Record of Southen Signals, G.A Pryor) and think I'd given a fair fist at creating signal diagrams for the project. I was still unsure if I'd understood signalling practices correctly. While members of my local Scalefour Group are very willing to offer advice and documentation, they're knowledge is heavily LNER influenced. So a few months ago I sent my thoughts to a long time friend who might help. Fortunately he new Paul Severs who is very knowledgeable of SR practise and wow... what a response. I feel indebted to him for taking the time to read and understand my thoughts then produce the following diagrams. Paul also supplied comprehensive explanatory notes, which, with his permission, I copy out in full below.

a] Distant signals on single lines were invariably 'fixed', i.e. not operated from the signal box, and never in the 'off' position; the very short distance between station and shed boxes would not require any distants [though for interest I have included a repeater for the down station home on the post of the Polbrock down starter, and a fixed distant arm on the post of the up main advanced starter on the Grogley Station diagram]; therefore this also simplifies signalling: those numbered 24, 25 in shed box would exist as fixed distant, and so would not have levers allocated in the frame - those numbered 1, 2 in same box, and those shown on same posts as 21, 22, 23 would not exist at all. Very sad for modellers who would like to have as many different coloured levers in their signal boxes as possible - if you want yellow levers you must have long stretches of double track!

b] Junction [DOWN] end of station too complex - I realise it is inspire by the multitrack junction at the north end of Barnstaple station, but that was highly unusual - at first I thought that the line behind platform 2 was platform 3 - I see it is labelled as a goods loop, presumably to be used for the exchange sidings. Therefore this would be connected to the up line [Platform 2] at the point of the junction by way of a double slip - greatly loved by the LSWR! See revised plan suggestion, Grog Jcn Revision 1.jpg. This also simplifies the signalling. Small suggestion - junction signal box would be better on down side, as per SBD. 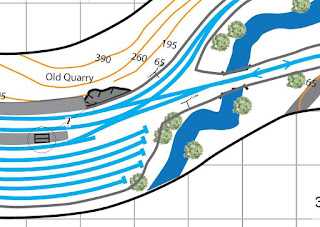 d] Ref. revised SBD [station/junction] [Grog Jcn Sig Diag.jpg] - There are 34 active levers required, so the box in reality would have had a 36 lever frame with two spare, though if society levers come in fives, you could have 35 with one real spare and another imaginary spare! Here's the lever numbering with labels as they would appear in the levers::

* SR was very economical with signals, especially on single lines, so where possible, shunting moves made use of running signals; shunting signals were only used for movements for which there was no available running signal. Furthermore, where LSWR [like many pre-group companies, and as GWR continued to] used a shunt signal for each route, the SR used just one for all routes from a given stop point; after all, they argued, both driver and signalman knew which route was intended, and the latter could only set one route at a time. So under LSWR there would have been a Stevens drop-flap ground signal at 18 for down to up main shunts, and another [21] at the entrance to the down siding. Some companies used ground signals as 'detectors' operated by the point to indicate which route was set; neither LSWR nor SR used such a practice. Early LSWR signal practice economised on levers by having two shunt signals [covering the opposite directions through the same crossover points] operated by one lever, which in the 'on' position was vertical in the frame - to make one signal 'off' you pushed [to the 'normal' 'on' position], and for the other you pulled [to the 'normal' 'off' position in the frame] ! SR removed all such 'abnormalities' as soon as possible!

# Entry to the goods loop: from both the Bodmin and Mawgan Porth branches, entry does not entail crossing a running line, so LSWR/SR both economised by placing the goods arm on the same post as the home signal, below it, hence Nos. 4 & 13 signals; entry from the down direction requires crossing the up line, so that would be made clear by placing the goods arm in a lower position on a bracketed doll, hence the No. 30 signal.

(Where any signal [running or shunt] permitted movement through a facing point that was locked because of passenger running movements, the signal wire ran through a detector box on the line side which was operated by the FPL - if the lock had not engaged, the signal wire could not be pulled.)

e] Polbrock shed: owing to the very short distances [real or model] between the station and the shed the need for signals is greatly reduced. I offer a much simplified SBD [Polbrock Jcn Sig Diag.jpg] requiring only 15 levers - no ground signals needed for movements in and out, nor within the shed area. All movements governed by the running signals, or in the rare event of a light engine off the Exeter line needing direct access to the shed, by hand signals.The minor suggestion I would make is to move the scissors crossover points nearer to the points into the shed, and the signal box nearer to the junction as in the revised part plan [Polbrock Revision.jpg]. The alternative is of course two successive simple crossovers, as at e.g. Tipton St. Johns, but a scissors crossover is interesting, and a challenge to one's point-building schemes, so I can see why Ian has put it in! Anyway, the Polbrock lever frame would look like this:

* Being a 'trailing' crossover, no FPL is required
** This would be an interesting signal - a miniature arm, with or without ring, but painted YELLOW: in the 'on' position, like a distant, it could be passed when going from
headshunt to the shed complex, and no signal is required for the opposite direction; when pulled off, it signified that the points were set to cross to the up main, and thence
to No 3 signal for movement to the station, or in reverse to the No 12/14 signal for authority to proceed onto the Wadebridge or Exeter lines
# Although the Exteter route was the major route, in signalling, the taller arm refers to the route straight ahead, the lower arm to the route requiring crossing the points.

Now to the questions Ian asks:

1. Positioning of distant signals. I have already answered this in my notes above [Note [1]]

2. Operation of shunting [ground disc] signals. LSWR/SR virtually never used these as route indicators, so were always worked by a separate lever. As noted above, economy demanded that they were only placed and used when a necessary movement could not be authorised by running signals; pulling off a running signal authorises the movement you are supposed to do, not necessarily to proceed to the next block post!!

3. Facing Point Locks [FPLs]. These are only required on points which face the direction of travel of a passenger train. The necessary locks are indicated on the revised signal box diagrams.

4. Grogley junction complex [!]. The similar complex at the north end of Barnstaple station was of course necessary because of limited space, the sharp curve to the river crossing, and the number of passenger routes; since the third route here is into a goods loop, it would be accessed by a double slip point at the throat of the junction, obviating the necessity of the third crossing road - see Grog Jcn Revision 1.jpg for my suggestion.

5 & 6. Distant signals . Again see note [1] - they would all be 'fixed' distants, not operated by the signal box, and never 'pulled off'. There are no 'outer' and 'inner' distants, only inner and outer home signals [and outer homes were only required on faster, double track lines]. Sometimes because of the shortness of block sections on main lines, the distant for the next section is on the same post as the starter or advanced starter signal of the previous section, and where through running of expresses needed to be signalled, distant arms were used as 'repeaters' for the next stop signal, again mounted below the previous stop signal. However, even on a busy branch such as this [!] speed restrictions would mean that no operational distant was needed - strictly speaking, neither the banner repeater for Grogley's down home, nor the fixed distant on Grogley's up advanced starter would have been needed or used, but I include them for a bit of variety, on the authority of 'modeller's licence'!

I offer this as advice - none of it needs to be accepted, but it does reflect what the LSWR/SR would have done if this station/shed complex had been a reality.

I've sat on this information for some considerable time, trying to take it all in. Now the Lincoln exhibition is out of the way, the "Man Cave' back in some sort of order after our holidays away along with eBay sales creating a small hobby fund, my thoughts are back to the big project.

I'm fully in tune with the Paul's suggestions for the simplification of the junction and the alteration at the up end of the station, as I am with the minor alterations at Polbrock. The only suggestion I'm having a problem with is moving Grogley Signal Box into the remains of the quarry. I'd position the signal box on the platform to give a good view around the curve. Moving the box to the inside of the curve would severally restrict the view due to the contours of the surrounding land. Would the lie of the land have influenced the positioning of the box or its location close to a complex junction? As the building of the Grogley Junction section of this project is way in the future that decision can wait.

The only other problem I have is that I agree with Ullypug's comments on two previous RMWeb posts (1) & (2) about the scissors crossing at Polbrock and the double track being a little out of character for the North Cornwall line. However, I would still, somehow, like to replicate the two adjacent single lines that ran out of Wadebridge... I also need to find an example for the junction at Ruthernbridge or re-think that section of the line due to Compound2632 comments. Any suggestions anyone?

Well.. next project has to be a P4 loco chassis Pannier or Class 08 along with the Lincoln "show outcomes" on Tredethy Wharf, so I've still some time to mull over this quandary...

If you have read this whole post and reached this point my I thank and congratulate you.